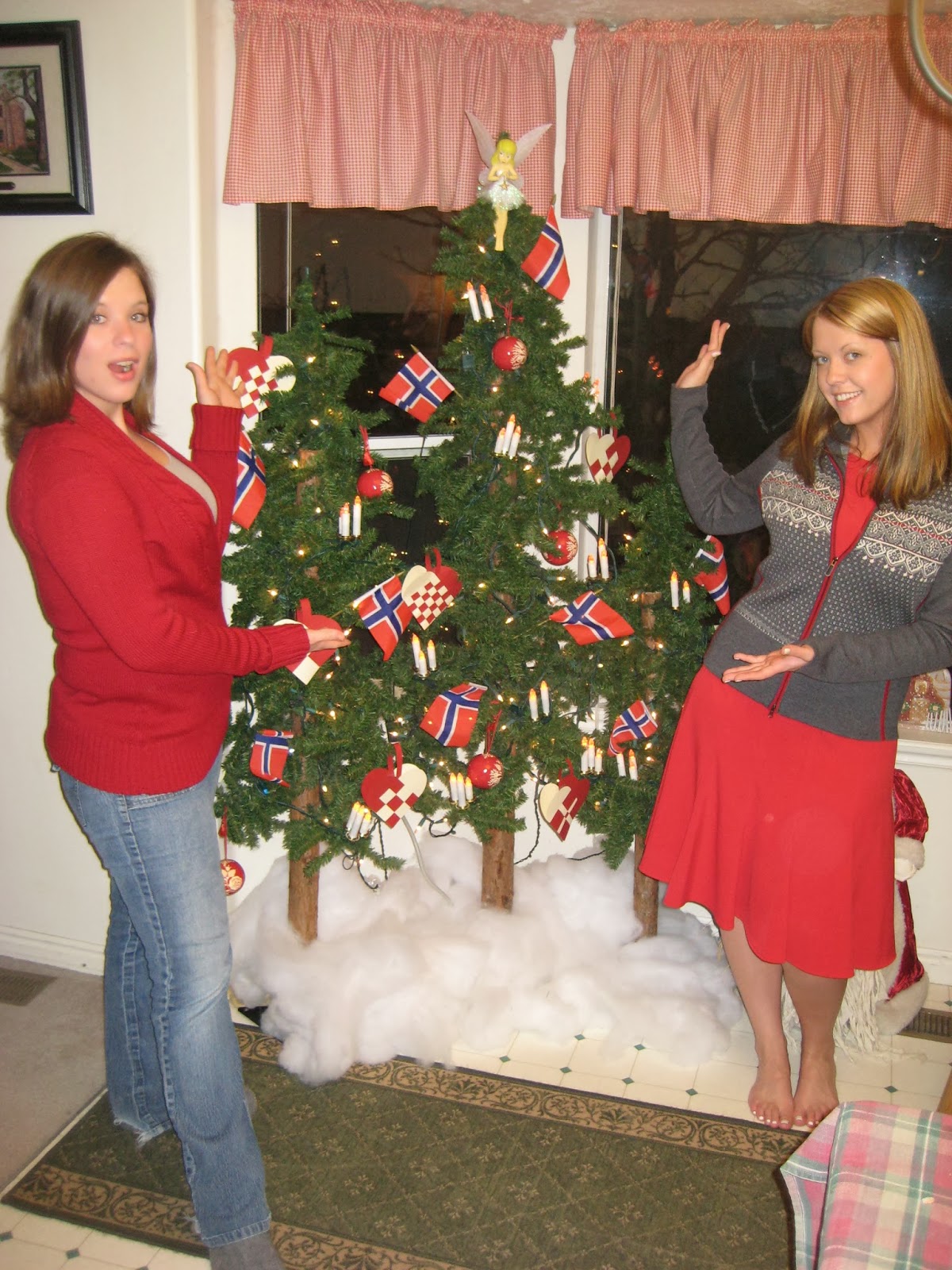 Photograph by Author "The Halvorsen Sisters and
their Norwegian Christmas Trees." 2010 jpeg

Introduction
My ancestors came from the Northern European country of Norway, but it wasn’t until a family visit to Walt Disney World's Epcot (“Epcot” n.d., online) some 4515 miles away from the actual country did we really start to discover our Norwegian roots. At Epcot just beyond the iconic ball you will find the World Showcase, pavilions and areas that represent several countries of the world surrounding a picturesque lagoon. There on the water's edge tucked between pavilions representing China and Mexico you will find the Norwegian pavilion with reproductions of iconic architecture, food, decorations, and the most popular ride in the World Showcase, the Maelstrom. The amount of people a year who visit this faux Norway, is equivalent to the actual population of Norway, (“Norway” n.d., online) making it a great way to educate the masses on the culture and folklore of this nation. Because of the Norway pavilion some of my first impressions of what is important to Norway was vikings, trolls, the land and sea. This might not be the best representation of the values of the actual people of Norway, but it is a great spring board to start our exploration of the Norwegian folk.

The Folk
Norway is part of the Scandinavian countries in northern Europe which also includes Denmark and Sweden. The area was settled by east Germanic tribes between 780 to 1100 AD whose culture overtook over the original Norse population. The Germanic tribes gave the area the name Scandza which means “womb of nations.” (Boysen, 2011) This monicker came into fruition as the Viking age continued and Scandinavian vikings explored, traded, settled, and even raided much of Europe and the world leaving behind an influence wherever they went.

During this time a unique Norwegian Farm Culture began to develop and continues to be perpetuated today. There is a emphasis on self reliance with rural farming and fishing, along with associated values that permeates the folk culture, rituals, myths, and tales of this northern nation. In the 18th century Norway experienced a strong patriotic movement that made it possible for the perseverance of this Norwegian Farm culture. With it an emergence and divergence of Norwegian culture from that of other Scandinavian countries developed. Modern Norwegians or “Nordmen” as called by Scandinavians, a population of over 5 million, continue to honor their unique folklore today. 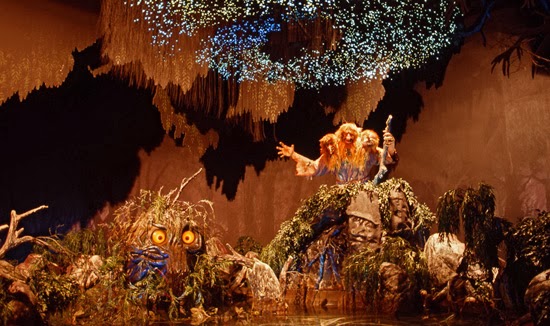 Trolls
One of the most abundant decorations you will see in the Norwegian pavilion at Epcot is statues, carvings, and figurines of a common mythological creature, the troll. Trolls are creatures of varying sizes and ugliness that live in the mountains, fjords, forests and nature of the land. (“Trolls of Scandinavia” 2008, online) Their temperament can be mean, mischievous, or even benevolent. There are dozens of types of trolls as well as legends. From waterfall trolls, Fossegrimen, to Huldra a lady troll who liked to seduce men, and common farm trolls, Nisse, the Norwegian landscape seems to be dotted with trolls. These urban legends aren't just told around a campfire or to keep a child on their best behavior, they are part of their culture and has embedded themselves into rituals and practices of Norwegians even today.


According to the mythology every farm has a Nisse troll. They view the land as their own and sometimes can give the farmers who they view as squatting on their land a hard time. A Nisse can be a good creature to have, if a farmer keeps it happy by being kind to his own farm animals and offering gifts to the Nisse. Nisse enjoys porridge with butter, and as such a ritual developed where a farmer on Christmas will leave a bowl of porridge and butter out for the Nisse to eat on Christmas, or Yule. In the morning the bowl is checked to make sure that the Nisse has eaten it and is pleased with the offering. If the porridge is not eaten, it is viewed as a bad luck and is expected to be followed by events like bad crops, spoiled milk and sick animals. This ritual has evolved and perpetuate the story of Santa Clause, who can be interpreted to mean something like a yule nisse or Christmas Troll, giving gifts to the deserving.


Stories of trolls wither friend or foe. are just some of the many legends of mythological creatures that effected the population of Norway. But there are other legends that shaped the nations folklore, and these ones are based on historical people and events. These are the stories of the Vikings.

Vikings
Every World Showcase Pavilion has an iconic landmark and for the Norway pavilion it is the Norwegian Stave Church, a gallery stocked with exhibit of viking replicas and artifacts dating as far back as the 9th century. Norwegian vikings has sculpted the culture, religion, and politics of the Norwegian people. Christianity took longer to spread into Scandinavia then other areas of the world so the Vikings worshiped a pagan pantheon of Norse Gods until the Viking king Olaf II Harldson (Boysen, 2011) converted to Christianity in the 11th century. History has recalled “Olaf the Holy” as a violent viking whom participated in brutal attacks across the European content and used the conversion to Christianity of his nation as simply a power move. He was killed in battle in the Battle of Stelkstad in 1030 AD and became a martyr and a later a saint of the Catholic church. Christianity grew strong over the next centuries and in 16th century, the Evangelical Lutheran Church of Norway became the official church of Norway of which over two-thirds of the Norwegian population is currently members of. Although a small percentage actually practice the religion. (“Religion of Norway” n.d., online) 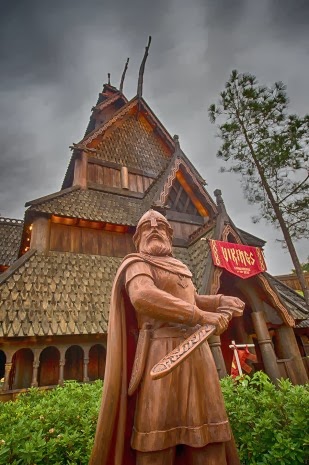 Every year the viking king, and saint, Olaf II is honored by a name sake holiday on July 29th commemorating his death. The Stiklestad National Culture Centre in Nord-Trøndelag puts on a St. Olaf festival every year that attacks tens of thousands visitors to concerts, seminars, performances and more about the vikings. (“Top 5 Viking Experiences in Norway” n.d., online) Viking feasts, festivals and reenactments are common throughout Norway and a very popular way for the people to inform and educate the outside world in performances. These events also become a great way for Norwegians to celebrate their hermitage and teach their younger generation about great vikings like King Olaf II, Cnut the great, and Erik the Red.

Conclusion
Visiting the Norway Pavillion in Epcot for me has become more then a vacation, but a call to learn about my ancestors. Our visit on May 17, 2009 coincided with Norwegian Constitution Day, a day celebrating the signing of a Norwegian constitution in 1814 effectively ceding the nation from the Denmark and Sweden. At the event there was such an atmosphere of celebration as Norwegians settled here in America poured into Epcot to mingle with each other. Norwegian flags of red, white, and blue hung from every available place, festive music hung in the air, Norwegian food and drink was in plenty and Disney Cast Members native to Norway wore traditional Bunad clothing while handed out flags and bracelets to the guests.

We spent most the day their riding the replica Viking ship past the trolls on the Maelstrom ride, munching on open faced salmon sandwiches, crafting at the kids table and chatting with actual Norwegians. We have since celebrated the holiday as a family at home with a Norwegian feast of our own and watching Norwegian films. Constitution Day is not the only day we celebrate our newly discovered roots, the Christmas is a season full of Norway now, with talks of trolls, Nisse, Krampus, and even the Norse Gods mingled with our usual nativity and tree. Now, we are very proud of our Norwegian heritage and viking blood.